We trust you will be enriched by your visit to our site and as you learn about our history.

A prayer as you begin

O LORD, you have searched me, and you know me.
Help me to know your presence in this sacred space. Amen.

In 1869 a group of 56 people came to this area from the Barossa Valley in South Australia. They were Lutheran farmers, of German and Wendish descent, looking for new land. They came overland along the Muarry River in covered wagons. One of these can be seen in a building near the church. During the six week trek they were under the leadership of Elder Johann Gottlieb Klemke, and a plaque can be seen under the tree outside the church. The first church, built of bush materials, was situated between the present church and hall.

In 1872 they called their first pastor — Pastor Theodore Immanuel Egan. A few years later in 1886, Pastor Gottlob Simpfendörfer, took charge of the parish and was to remain the spiritual leader until his death in 1933. During his ministry the congregation grew much larger as many new families moved into the area. A second church, built of sandstone mined a few kilometres to the east of Walla Walla, was dedicated in 1889. (This building, minus its steeple, still stands and is to the north of the present church building). Twenty years later, this second church became too small for the growing congregation and the present (third) church building was planned. It was dedicated in 1924 and has been used for worship services since that time.

The third church building was designed by Mr R. Rahnenfuhrer of Germany. The builders were Messrs C Hardy & Co of Wagga Wagga, using bricks made at the Culcairn brickworks. Most of the wood used in the building and furniture came from Canada. In recent years the roof of the church has been replaced and internal rods have been installed to strengthen the walls.

Another long serving pastor was Pastor JTP Stolz who joined Pastor Simpfendörfer in 1925, and served in the parish for 28 years. At present the Walla Walla Lutheran congregation has about 90 worshippers each Sunday, many of whom are descendants of the early German or Wendish settlers. 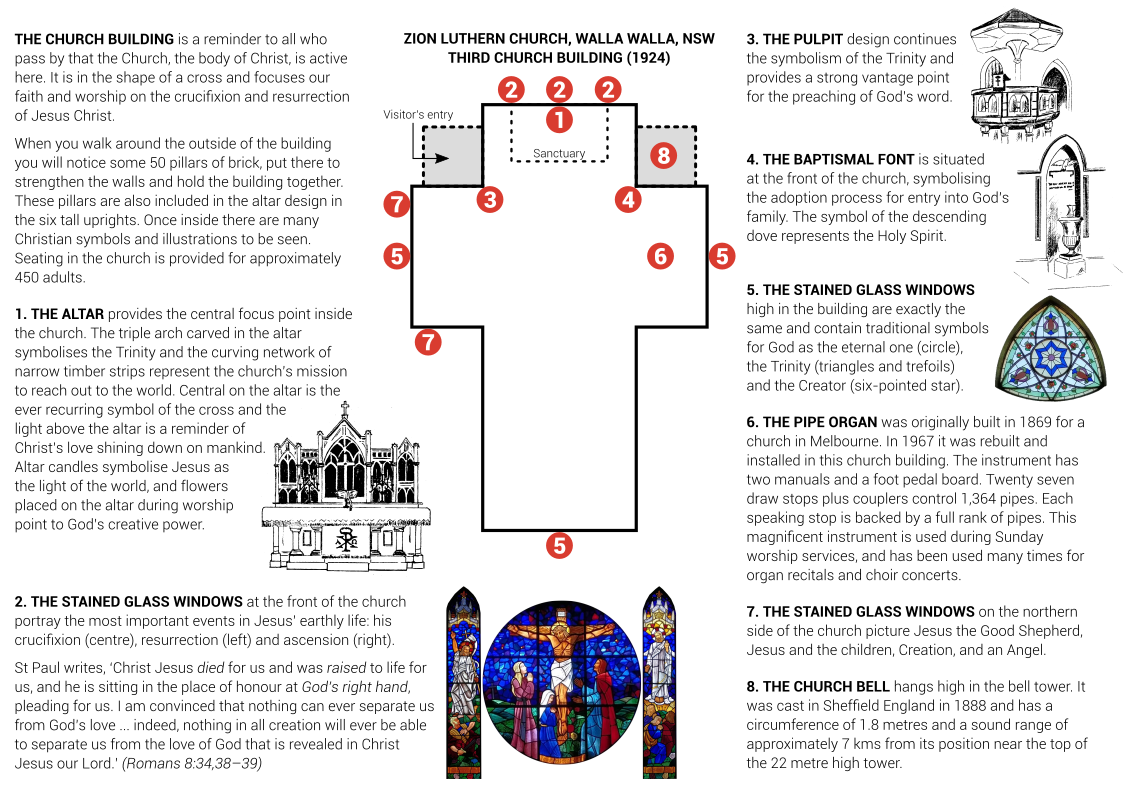 You can listen to an audio tour here.