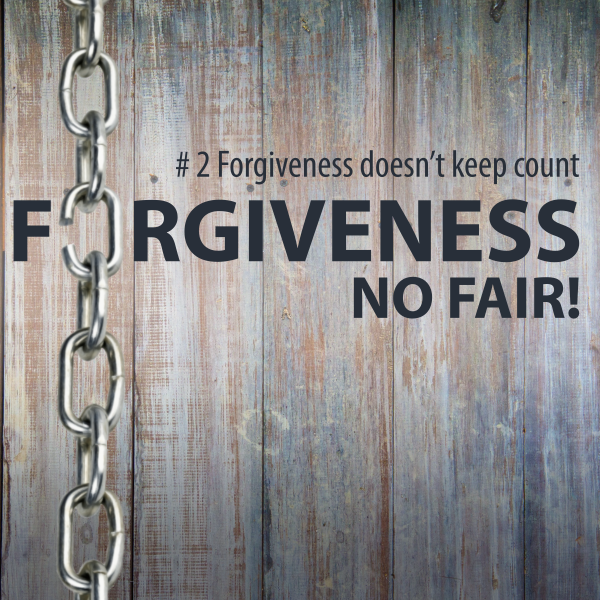 21 Peter came to Jesus. He asked, “Lord, how many times should I forgive my brother when he sins against me? Up to seven times?”

23 “The kingdom of heaven is like a king who wanted to collect all the money his servants owed him. 24 As the king began to do it, a man who owed him 10,000 bags of gold was brought to him. 25 The man was not able to pay. So his master gave an order. The man, his wife, his children, and all he owned had to be sold to pay back what he owed.

26 “The servant fell on his knees in front of him. ‘Give me time,’ he begged. ‘I’ll pay everything back.’

27 “His master felt sorry for him. He forgave him what he owed and let him go. 28 But then that servant went out and found one of the other servants who owed him a few dollars. He grabbed him and began to choke him. ‘Pay back what you owe me!’ he said.

30 “But the first servant refused. Instead, he went and had the man thrown into prison. The man would be held there until he could pay back what he owed. 31 The other servants saw what had happened. It troubled them greatly. They went and told their master everything that had happened.

32 “Then the master called the first servant in. ‘You evil servant,’ he said. ‘I forgave all that you owed me because you begged me to. 33 Shouldn’t you have had mercy on the other servant just as I had mercy on you?’ 34 In anger his master turned him over to the jailers. He would be punished until he paid back everything he owed.

35 “This is how my Father in heaven will treat each of you unless you forgive your brother from your heart.”

Let us pray: Heavenly Father: send us your Holy Spirit to open our ears to hear your preached Word. By your Word forgive us our sins, set us free, release us from debt, so that we can freely serve you. Comfort us in Jesus’ name, we pray. Amen.

Peter’s question is important. Not only does this question give the context for the story about the king forgiving the debt of his servant, but this is a common question we often ask. Is there a limit to forgiveness? Will God forgive me if I’ve done x, y, and z? What if someone did a, b, and c: would God still forgive them? And how many times do I have to forgive? What if someone is really annoying or wrong or evil: do I really need to forgive them?

As I hear this text, I imagine Peter’s reasoning went something like this: “These other disciples are frustrating! How many times should I forgive them?! I’ll ask Jesus. He’ll probably say two or three times, but I’ll try to impress him with my holiness, so I’ll surprise him and suggest seven times!” (Seven was a special number of the Israelites, representing completeness and wholeness). But I imagine Jesus’ answer surprised Peter! Jesus doesn’t say to forgive two or three times, not even seven times, but he puts another 7 in front of 7, saying to forgive 77 times! It’s like he says: “There is no limit to forgiveness. If you’re keeping count, then you haven’t really forgiven. You’re still holding that number against the person. Real forgiveness doesn’t keep count. Forgiveness is unlimited, unrestricted, incalculable, uncountable.”

And the story Jesus tells reiterates this point. Jesus invites us to imagine a king. The king has a servant (or better: a court official) who has racked up a massive debt. The debt is ridiculous! Ten thousand bags of gold. Literally there is a ‘myriad’ (the largest number in the Greek vocabulary) of ‘talents’ (the heaviest measurement of weight available). The biggest number of the heaviest measurement. Imagine the biggest pile of money you can picture. This is how big the debt is. These numbers are intended to shatter our petty attempts to calculate or keep count when it comes to forgiveness.

The servant falls to his knees. He doesn’t plead for his debt to be forgiven, but he pleads for more time. ‘Give me time,’ he begged. ‘I’ll pay everything back.’ (Matthew 18:26). What a preposterous promise?! How will he repay?! The king knows there is no way the ridiculous level of debt could ever be paid. The servant would spend a lifetime struggling under the crushing weight of this debt, and wouldn’t even scratch the surface. So the king takes pity on his servant — he shows ‘compassion’ and ‘mercy.’ The king no longer counts what is due. With a magisterial wave, the massive debt is cancelled — the servant’s shackles are unlocked, the chains rattle to the floor as the bolt cutters release him, his obligation is waved, and the servant is freed to live a new life. Through this story, Jesus is saying that you can’t calculate forgiveness or even try to quantify it. There’s no point trying to keep count in the kingdom of God.

Wouldn’t it be nice if that was the end of the story? But there’s more! “But then that [very same] servant went out and found one of the other servants who owed him a few dollars.” (Matthew 18:28). You can almost hear the disappointment and disbelief in Jesus’ voice. Again the amount is, in contrast, ridiculous: a few dollars compared to 10,000 bags of gold. The first servant grabs the other by the throat, as a sign of power, to lord it over him. “Pay back what you owe me!” The servant being choked falls on his knees, mirroring exactly what the first servant did before the king. His plea is word-for-word the same: ‘Give me time,’ he begged. ‘I’ll pay you back.’ But the first servant refuses. Instead he has the man thrown into prison. And the first servant is in his right to do this; he’s following the letter of the law: you don’t pay, you go to prison. If you’ve ever spoken with someone who has found themselves in deep financial debt, they’ll tell you it feels like prison. And sin is the same. When someone sins against you, the normal (fallen) human behaviour is to throw that person into prison, then keep them there for as long as you can: you hold it over them, you pile on more guilt and debt, you maintain your power over them, and lock the doors to the jail cell.

The other servants are grieved to hear the actions of the first servant. They tell the king, and the first servant finds himself in prison. How ironic that both servants end up in prison?! Nelson Mandela, imprisoned in South Africa during the Apartheid, once said, “As I walked out the door toward the gate that would lead to my freedom, I knew if I didn’t leave my bitterness and hatred behind, I’d still be in prison.”

I can imagine the crowds hearing this second part of the story gasp in disgust. “What shocking behaviour? Pure evil and wickedness?! That first servant got what he deserved!” As the hearers are outraged by firstly by the injustice and then the ultimate comeuppance, the story penetrates stony hearts. But then the story explodes like a time-bomb, and hearers realise that Jesus is talking to them. Jesus is talking to you and to me.

Both parts of the story, together, are likened to God’s kingdom. Like the king, God has the authority to forgive our crushing debt with a wave of his hand. The bolt cutters of forgiveness release the weight of sin like chains or shackles falling to the ground. Your sins are forgiven! You are free! You have a new life! A new future! You no longer have to slave away to pay off the debt! You are no longer imprisoned to sin, death, and the power of the devil! But the story continues. If you use this freedom to throw others into prison, if you keep count and demand that your debtors pay you what they owe, all that happens is you end up back in prison. Forgiveness has implications for your life here and now. The forgiveness you receive must/should/will transform your interactions with others. If your life haven’t been transformed, if you’re still counting people’s sins against them, then have been truly released from your own prison?

German Lutheran theologian and pastor Dietrich Bonhoeffer wrote about what he called ‘cheap grace‘ and ‘costly grace.’ Cheap grace doesn’t cost me anything — God sets me free, but I continue to live my old life, calling in the debts owed to me. Cheap grace doesn’t have implications for how I live. But costly grace, well, that costs something. It costs the king who waves the debt — it cost Jesus his innocent sufferings and death. But it also costs me something. To receive forgiveness, having my debt cancelled, well this changes my life — I am now bound or obligated to likewise forgive. The king says to the first servant, “You evil servant. I forgave all that you owed me because you begged me. Shouldn’t you have had mercy on the other servant just as I had mercy on you?” (Matthew 18:32–33). ‘Shouldn’t you have had mercy?’ Or to put it another way: ‘Is it not necessary that you also show mercy?’ Receiving forgiveness will cost you. It means you must stop counting other people’s sins against you. It means it is necessary that you wave the debts owed to you. You are now obliged to show mercy as God shows mercy. As we pray in the Lord’s Prayer “Forgive us our debts, as we forgive the debts owed to us.” (Matthew 6:12). (Note that Matthew’s version uses the word ‘debts.’)

Are you struggling with the same question as Peter: How many times should I forgive? How many chances do I give that colleague at work? How many times do I welcome home that wayward child? How many times do I accept an apology from my spouse or friend? Not two or three, not even seven times. But 77 times! Why? Because forgiveness is no fair. Because forgiveness doesn’t keep count. Because your heavenly Father is gracious and compassionate, he is abounding in love and mercy. He doesn’t pay you back in keeping with the evil you have done. He doesn’t keep count of your sins. As far as the east is from the west (and infinite distance), that is how far your sins have been removed. Now go and do likewise. But to forgive like him will cost you. You won’t be able to lord it over others, no longer can you maintain your power over others, or lock them in prison as they slave away to pay back the debt they owe. For whatever is locked on earth will remain locked in heaven, but whatever is unlocked on earth is unlocked in heaven. Amen.