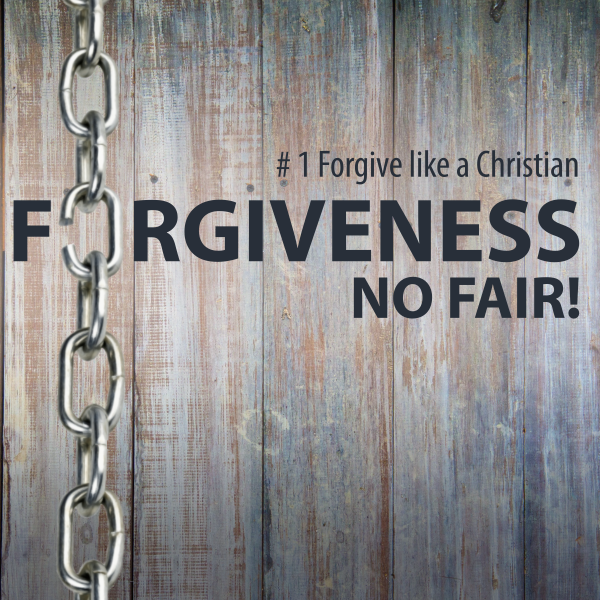 Jesus said to his disciples: 15 “If your brother sins against you, go to him. Tell him what he did wrong. Keep it between the two of you. If he listens to you, you have won him back.

19 “Again, here is what I tell you. Suppose two of you on earth agree about anything you ask for. My Father in heaven will do it for you. 20 Where two or three people meet together in my name, I am there with them.”

In our gospel reading, Jesus gives a three step approach to deal with situations in which you are sinned against by someone, particularly someone in the church:

We’re going to explore how this process of forgiveness is totally unfair. But that’s exactly how God’s forgiveness works. Forgiveness, no fair!

Let us pray: Heavenly Father: send us your Holy Spirit to open our ears to hear your preached Word. By your Word forgive us our sins, set us free, release us from debt, so that we can freely serve you. Comfort us in Jesus’ name, we pray. Amen.

Have you ever been wronged? Have you been sinned against? As a quick diagnostic, we can work through the second table, or group, of commandments concerning love of neighbour:

Commandment #5 — “You shall not kill.” This means we should not endanger our neighbour’s life, nor cause them any harm, but help and befriend them. Obviously you haven’t been killed, but has anyone ever failed to help you? Has someone ignored you, snubbed you, given you the cold shoulder? Have you been caused physical, emotional, or mental harm?

Commandment #7 — “You shall not steal.” This means we should not rob our neighbour of their money or property, nor trade dishonestly or deal in shoddy wares, but help them to improve and protect their income and property. Has someone ripped you off or swindled you? Has someone stolen or broken your property? Have you ever been a victim of dishonest business practices?

Commandment #8 — “You shall not bear false witness against your neighbour.” This means we should not tell lies about our neighbour, nor betray, slander, or defame them, but should apologize for them, speak well of them, and interpret everything they do in the best possible light. Has someone told lies or spread a nasty rumour about you? Has a busybody gossiped about you behind your back? Have you been betrayed by a friend? Has someone not spoken about you in the best possible light?

In our gospel reading, Jesus gives very specific instructions to his disciples and Christian communities on how to deal with situations in which you are wronged. Jesus starts off saying, “If your brother sins against you, go to him. Tell him what he did wrong. Keep it between the two of you. If he listens to you, you have won him back.” (Matthew 18:15). So the first step in forgiving someone who has wronged you is to go to them. That’s a bit unfair, isn’t it?! I mean, imagine someone has wronged you. You haven’t done anything wrong, they’ve done the wrong thing to you. So why should you have to go to them? They’re the one who has sinned against you. Why is the onus on you to sort it? Forgiveness, no fair!

And also notice that Jesus says to “keep it between the two of you.” Usually the first thing I want to do when someone’s wronged me is to go and tell someone else. I’ll want to tell my wife or a friend. “Hey, do you know what so-and-so just did? They spread this rumour about me. They’ve done such-and-such, can you believe it?!” I want to whinge and complain about them, but Jesus says no. He says, “Keep it between the two of you.” Forgiveness, no fair!

Well, Jesus knows that whenever we are wronged, when someone sins against you, it’s like a chain is wrapped around you and the other person. You are shackled to that other person. That person harms you, so you think about what they’ve done. That person says hurtful things, so you stew on their words. It’s so easy to become bitter and consumed with the wrongdoing. This link between you and them is a chain that locks you to them. The sin ties you up and binds you to the perpetrator. But suppose you begin to speak badly against the person you are chained to: then you start breaking the eighth commandment, you speak ill of your neighbour or you don’t interpret their actions in the best possible light. So more chains are added! You’ve sinned against them now, and more and more shackles lock around you. You are bound tighter and tighter to them.

Instead of this, Jesus directs his disciples to go tell that person their sin and get it sorted out. Sometimes I’ve heard people say that Christians are doormats, always forgiving people, that forgiveness is for the weak. But actually forgiveness is for the strong. Forgiveness means to get out the bolt cutters and sever the chains that bind you to that perpetrator. The word “forgiveness” in Greek literally means to be released and unbound, to be liberated and set free. Jesus says, “What you lock (bind) on earth will be locked (bound) in heaven. What you unlock (loose) on earth will be unlocked (loosed) in heaven.” (Matthew 18:18). Imagine walking around all the time being chained to other people! You couldn’t get any work done, you wouldn’t enjoy yourself, life would be miserable! So this is why forgiveness is unfair, this is why Jesus tells us to go and sort it out — because he doesn’t want his disciples living life locked up in chains. I wonder how much pain could be avoided if we went to the people who have wronged us first and spoke to them, rather than stew on things or gossip about them?

Now you might think that I’m saying: “If someone wrongs you, don’t tell anyone, keep it a secret.” Please hear me: I’m not saying that. Step two of the process, after you’ve gone to the other person and they haven’t listened, is to get help by telling one or two others and bringing them with you. (And also please note, that sometimes, for some wrongs, you might need to skip step one and tell someone who can help you, like a person in authority e.g. a parent, teacher, the police, or a health professional). These other helpers can give perspective on the matter. Maybe the person who has wronged you actually has a speck in their eye, but you have a log in your own eye! (Matthew 7:3). These one or two helpers will not only support you and act as witnesses to what was said, but also offer different perspectives along the road to forgiveness.

The third step Jesus says, if still they still won’t listen, is to “tell it to the church” (Matthew 18:17). This implies that Jesus is primarily speaking about matters where a Christian is sinning against a Christian. And the matters are big enough that they warrant a public hearing. But if all else fails, Jesus says to “Treat him as you would treat an ungodly person” (Matthew 18:17). This does not mean you give them the cold shoulder. You treat an ungodly person by patiently and gently speaking God’s Word to them. You pray for the Holy Spirit to open their ears and bring them back to belief. I don’t think this means that you shun them or excommunicate them. But rather, continue to speak God’s Word to them to bring their sin into the light.

So all of this sounds completely unfair. Although the other person sinned against you, Jesus puts the onus on you to go to them and tell them. Forgiveness, no fair! This is hard. This is for the strong. But the result is that the shackles that bind you to them, the chains that weigh heavy on you and pull you down, are unlocked and loosed. You are set free.

In fact, God experiences the same unfairness of forgiveness. See, when we sin, we sin against God. King David, in Psalm 51 writes that when we do wrong, we not only sin against other people, but we primarily sin against God. He writes, “LORD, against you, you only, have I sinned; and done what is evil in your sight.” (Psalm 51:4). When you sin, you sin against God. But God does something completely unfair. He lays your sin on Jesus. Jesus is chained and shackled to the cross. It’s not the nails that hold him there, but your sin. And he dies on the cross in your place. He is wrapped up and bound in the grave, while you are set free. He is killed, while you are made alive. Forgiveness, no fair!

May you benefit from the unfair nature of forgiveness. May you know that Jesus has unfairly taken all of your sin. And, although you are given the unfair task of going and telling others when they sin against you, may this lead to the chains of sin being severed with the bolt cutters of forgiveness. This is not easy. Because forgiveness is unfair, it’s not for the weak, but for the strong. So may God strengthen you as you unfairly forgive those who have sinned against you, just as he has unfairly forgiven you; in Jesus’ name. Amen.